Loïc SCHAEFFER, born in 1992, grew up in Griesheim near Molsheim (67) where he lives with his girl ffriend Sophie (see infra). Like his friend, Pierre Kuntz, he was very young won by the passion of fly fishing. Loïc, who is an excellent fisherman, has never wanted to fish in competition.

Loïc fishes very regularly in reservoir and river as soon as he has a free time. I’ve had the chance to know him since he was a teenager. Always looking for big fish, he often fish with the fly, but also to the Spangler. With a non-standard sense of observation, he knows how to adapt effectively to all conditions, and very often finds the technique and the fly of the moment before the other fishermen in the area.

Loïc shares his life with his girl friend Sophie. She has a cape infancy, carries out the profession of ATSEM. Loïc, himself, made a DUT in mechanical engineering and a bachelor’s degree and is an industrial draughtsman. He trained Sophie in his passion for fishing and she also “took the virus”.

His way of practicing fly fishing

A couple of passionate fishermen

Loïc and Sophie like to fish together. Whether it is in a boat on the water of Plobsheim to catch the pike, with the fly or other technics, whether in a reservoir or on the floodway canal that Loïc knows particularly well, where he often happens to catch the biggest and most difficult fish. Both take their vacations by targeting the nearby fishing trails. A fairly rare couple of passionate, loving and engaging flyfisher. 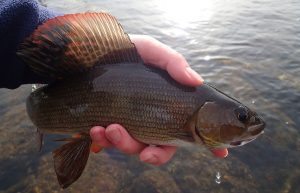